Earlier this season, I handed the recap reins over at TooMuchFreeTime for Terminator: The Sarah Connor Chronicles to my friend Greater Czarina.  She’s done a great job, and now that we’ve hit the season — and what will most likely be the series — finale (although the official word hasn’t come down yet), it’s time for us all to exhaustively discuss what I thought was a pretty great episode. 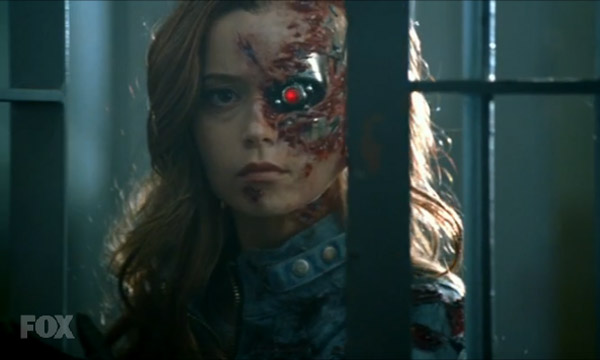 So head on over to TMFT, and read Greater Czarina’s recap! Then either here or there, let’s talk about what you thought of it.  Was it a good season finale?  If it’s the series finale, did it work for you?  Click through to see what I thought.

I thought this made both an excellent season AND series finale. I’d love to see another season (although the outlook is grim), but if not, I could live with this ending. It’s got a nice paradox feel to it, like the first movie had, and nicely echoes the pilot. Rather than living into the future to become the savior, John has fast-forwarded to the future, complete with a ton of knowledge about how SkyNet will try to monkey with the past. Presumably, he will send his own father and Derek into the past, knowing the crucial roles they’ll play. And the whole Allison/Cameron romantic feedback loop just boggles the mind.

Of course, it all falls apart if you parse out the continuity details too much. And there are loose ends like “Cam Henry” that make it impossible to know for sure how exactly the story would play out. But overall, I thought these paradoxes and uncertainties made for a really fun conclusion that keeps you thinking about it long afterward. And if we get another season or a made for TV movie (a la BSG) that carries on the story, all the better. They’ve certainly left plenty of room for that possibility.

Cameron breaking Sarah out of prison was kick ass, especially since she did it without actually killing anybody — but still causing plenty of property damage along the way — and it brought us back to the spirit of the old Arnold days.

As for the Not-Sex Scene between John and Cameron, I thought the great detail there was when Cameron asked him if the power source, which was presumably located roughly where our heart would be, was cold. John said it was, and she said this was good. To me, that really sent the message, once and for all, that Cam is incapable of romantic love — both her “heart” and the object that John has “penetrated” her to reach is cold. She is frigid. As you would expect a cyborg to be. But this only makes it all the more poignant that John gets the chance to be with a flesh and blood Allison in the end.

Regarding Weaver’s clothes, and the controversial issue of her not having them after the time jump, my take on that is that the process of time traveling reboots a liquid terminator to whatever they’ve established as their “default” state. Because without some kind of default state, wouldn’t a powered down (whatever passes for sleep or unconsciousness) T-1000 just become a big puddle of metallic goo all over the floor? So if she/it has set “Naked Weaver” as her/its default “desktop” so to speak, then any traumatic event, like time travel, would reset her to that state, and as soon as it passed, she could then modify that state with clothing.

Or … the writers just like showing us naked people post-time jump?

As for the eel that rejoins with Weaver-1000 after the drone crashes into the office, I wonder if that was her/its failsafe? That is, if for some reason the human part of her/it got destroyed, would the eel part of her/it have been able to carry out her/its mission? Also, keep in mind that Shirley Manson is a wee lass — so maybe the eel was the mass that the T-1000 didn’t need in order to portray Catherine Weaver convincingly?