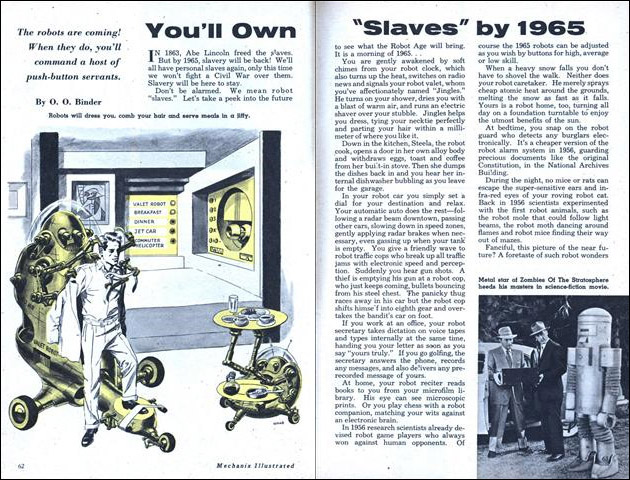 I have to say, the headline alone was a fairly bold prediction, considering that 1965 was only eight years away at the time.  Meanwhile, here it is 2009, and I think the best we have to offer in this particular area is the Roomba, which as of this writing is still priced just slightly out of my reach.  Not surprisingly, the magazine that ran this article, Mechanix Illustrated, was owned by Fawcett Publications, which also published the comic book Captain Marvel, which the author of the article, Otto “O.O.” Binder happened to write for.  Binder also created such Superman entities as Brainiac, The Phantom Zone, and Krypto the Super Dog.  Which makes it a little easier to understand the creativity of his predictions. 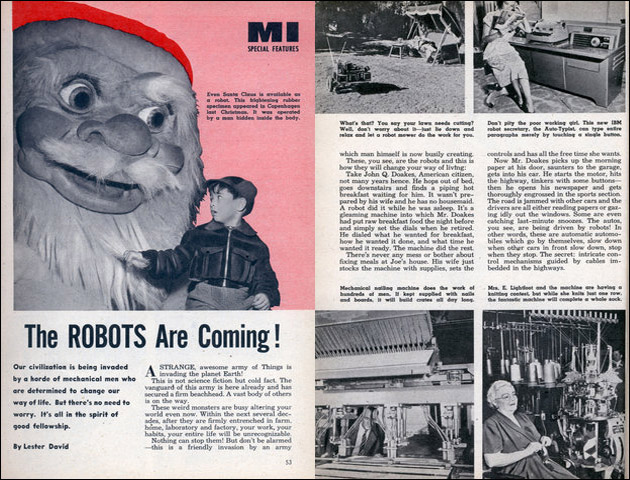 But this article does get one thing right … kind of:  “Mrs. Doakes has gone to the library for information on how to make a dress for her small daughter. She no longer has to dig through card catalogues, wait for her books to come down and take laborious notes. She simply sets some dials and immediately a list of books flashes on a large screen in front of her. She presses another button and a photostat of the list pops out.”  More or less, this has been a reality for a while now.  I know, because I happen to work for one of the companies that produces the data and software that makes it possible.

Helicopters for Everybody (written January 1951)
http://blog.modernmechanix.com/2009/01/24/helicopters-for-everybody/ 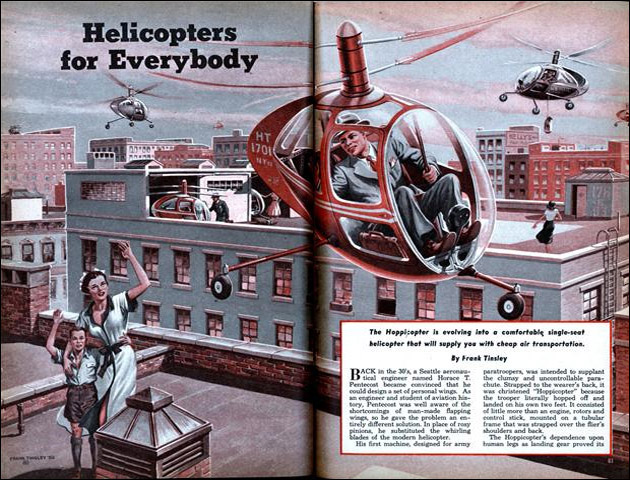 And last, but not least, there’s the personal helicopter — 1951’s answer to Kevin Smith’s demand for the flying cars that were once promised to us.  As cool as this would be, I shudder to think what the skies over New Jersey would look like during rush hour if even half the people who currently clog up our roads were flying one of these wacky things instead.  And imagine the insurance premiums!

3 thoughts on “Yesterday's Future Tech That Never Was”