“You’re in a desert, walking along in the sand, when all of the sudden you look down, and you see a tortoise. It’s crawling toward you. You reach down, you flip the tortoise over on its back. The tortoise lays on its back, its belly baking in the hot sun, beating its legs trying to turn itself over, but it can’t, not without your help. But you’re not helping. Why is that?” 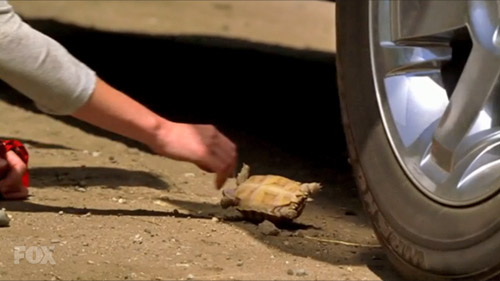 Do you remember where you heard that?

Give up? It’s from the opening scene of Blade Runner — one of many questions that make up the Voight-Kampff test being administered by Holden (a blade runner) to Leon (the patient), designed to provoke an empathic emotional response and thereby determine if the subject is a replicant/android. Turns out Leon is, and he proceeds to kill Holden. 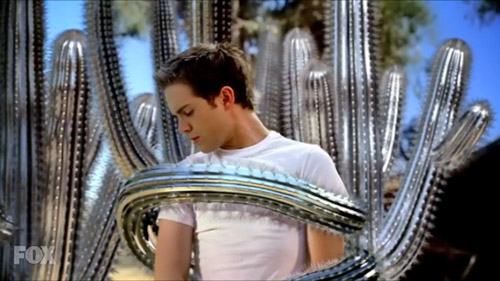 Early in this episode, Sarah sees a tortoise on its back and helps it. Later, Cameron asks John why Sarah did this, and John explains that it’s just what they do, help things that can’t help themselves. “Empathy.” They determine that the other options would be to leave the tortoise as is, or crush it. When John asks Cameron which she’d do, expecting the latter response, she tells him that a tortoise is no threat, and that terminators “aren’t built to be cruel.” And she’s right, of course. Time and again, we’ve seen terminators walk right past humans who pose no threat to them. They may be cold, but they are never cruel. But the Voight-Kampff test remains true here — Cameron might not kill the tortoise, but she’d feel no empathy for it.

Figurative tortoises abound in Sarah’s fever-induced nightmares, along with nurseries and killer (or nurturing?) cyborg cacti. It all seems to have something to do with unresolved motherhood issues. (Another V-K question is: “Describe only the good things that come to mind about your mother.”) But buried in there is also the image of three dots in a triangle. Doc Sherman isn’t able to help her sort through the meaning of this, mainly because Sarah isn’t willing to open up to him, but when she goes back to the Wall of Blood in the garage, she finds the same three dots next to the doctor’s name. So it means something, which I’m sure we’ll find out next week. 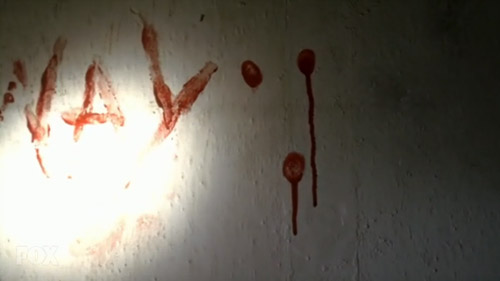 Meanwhile, Derek’s girlfriend Jesse has captured somebody she believes to be a human traitor — a “gray” — from the future. And not just any gray, but Fischer, the worst one of them all. Apparently, in the future, Fischer collaborates with Skynet to use drugged up human prisoners to teach terminators how to question and fool humans. And according to Jesse, he did this to Derek. But Derek doesn’t remember it, and hypothesizes that maybe he and Jesse are from different futures, and that maybe this means he’s made a difference in the present. That he’s changed the future. Of course, it could also just mean that he dies before he ever reaches the future. 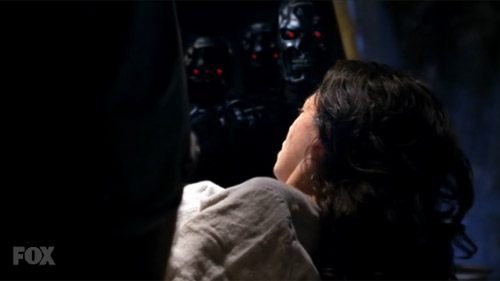 So anyway, Fischer denies being Fischer no matter how much they slap him around, and it isn’t until they find his younger self (played by Warren the Evil Geek from Buffy) and slap HIM around that Future Fischer finally admits who he is. Shortly thereafter, Jesse shoots and kills Future Fischer, to save Derek the guilt of killing Young Fischer. But the damage has already been done, because Future Fischer has already used Young Fischer’s security clearance to access a military computer and install a “roving back door”, which — besides whatever benefit this gives Skynet — results in Young Fischer going to jail for life for treason, which indirectly saves him from Judgment Day, so that Skynet can later rescue him, he can become a gray, and Skynet can eventually send him back in time to use Young Fischer’s security clearance to access a military computer … and so on and so on. Yet another handy time paradox.

Meanwhile, it turns out that Fischer isn’t the only good liar in town. Because when John and Cameron return to Mexico to burn up Cromartie’s body, they discover that it’s gone, and immediately rush to find Agent Ellison — the only other person who knew about it. Cameron beats the hell out of him, but he insists he knows nothing, and John ultimately believes him. As it turns out, Ellison DID dig up Cromartie, and he gives it to Catherine Weaver to further the cause of protecting mankind from the future machines. Poor deluded Ellison. I have a feeling things won’t end well for him. 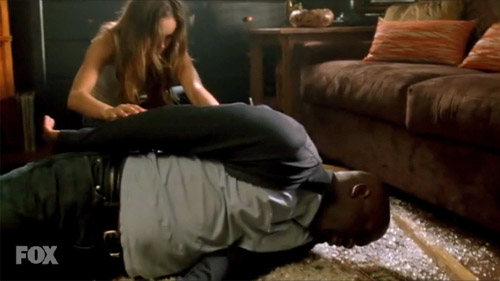 The funniest moment in the episode of course comes when Cameron, after beating the hell out of Ellison, before she leaves the room, leans down and rolls Ellison from his back onto his stomach. Thus recalling the tortoise conversation she’d been having with John a few minutes before. And you can see that she’s so pleased with herself after she does it. I swear, for a cyborg, she might just have the best sense of humor of any character on this show.